5 Tips For Dealing With Humidity

A Floridian’s Guide to Running in the Swamplands…

The following guest post is from our Best Damn Runner, Margarita Cambest. You can follow her blog at CupcakeCardio.com

There’s Arizona hot. I’ve been told it’s a dry heat with temperatures up to 120 degrees leaving residents unfazed. Then there’s fleeting California hot which only lasts a couple of days a year, and then there’s the ungodly humidity felt only in the South. 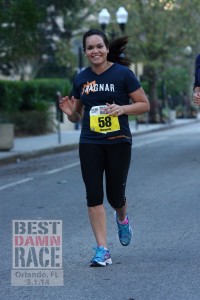 Now I know, my fellow South Floridians are cringing at the thought of being lumped in with other states south of the Mason Dixon line, but there’s something to be said for temperatures that make you feel as if you’re melting, boiling and imploding all at the same time. While bordering states experience their fair share of soul-crushing humidity, leave it up to Florida to do humidity best (Seriously, Disney in August? Just don’t.)
Running in the Sunshine State is unlike running anywhere else. The sticky humidity hits you in the face as soon as you leave the comforts of central AC. So what’s a runner to do?
Whether you’re a native or just visiting, here are five tips to keep you running in Florida like a pro:

1. Hydrate.
Start drinking water the night before a race. The goal here is to take in enough water that you start race day with the proper hydration levels. What’s proper will vary by runner, but clear pee is the goal here. Take in fluids about every 15 minutes if you’ll be running more than a 3-miler. Also, keep in mind that different types of hydration might also vary between individual runners. Personally, although I love my Gators, Gatorade during a race makes me dry heave. Make sure to experiment before race day so you’ll know whether you need to bring hydration with you or plan which water stops will be best.

2. Run early in the morning, late in the evening (before sunset though, safety first!) or take it to a treadmill in the middle of the day.
As someone who has for some unknown streak of spontaneity taken it upon herself to train for a half in the middle of a hot Florida summer, I know what running in the middle of the day feels like. It’s sordidly hot. It’s disgustingly sticky, and it’s just not pretty.
While training for my first half in Atlanta, I figured out early on that the best way to get a long run in without feeling like death in the middle of it was to schedule it early in the morning or late in the afternoon. Avoiding the hours of 10 a.m. to 4 p.m. worked best for me. Before sunrise or after sunset in a group or with reflective clothing will do as well.
There’s also no shame in taking a training run to the treadmill if you’re not feeling so hot (or if it’s just too hot period). Stay safe. Sure, running outdoors is much more interesting than running on the dreadmill but occasionally your body just isn’t feeling it and you’ll need to take it indoors. It’s OK.

3. Sweat. Wicking. Fabrics.
When I first started running I thought sweat-wicking fabric was just a fancy, expensive “want” promoted by a company with see-through pants. My indoor comfy cotton T-shirts stopped cutting it when I started running longer distances. Fabric blends made specifically for exercise will keep moisture off of your body allowing you to feel cooler and less like you’re drowning in a Guatemalan rainforest. But avoid light gray. It’s not cute on anyone.

4. Adjust the pace.
One of the best running advice I’ve ever received is to listen to your body. I know that sounds like hippie talk, but it’s true. Running in humidity takes a lot out of you, and you may not get a PR. Blame it on the weather Start slow and work yourself up to regular pace to avoid early burnout.

5. Don’t forget the sunscreen.
The sun here is no joke. This isn’t a humidity solution, but there’s something to be said for Floridians that remember to use sunscreen. Not only does SPF keep you from looking like Snooki at an early age it also helps decrease your risk of getting skin cancer. Always a good thing. Skin cancer affects all ethnicities so use at least an SPF 15 and remember to reapply. 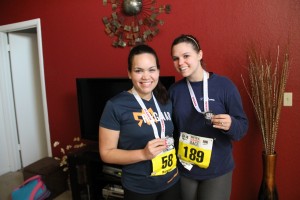 A little more about the author

Hi! My name Margarita and I blog over at CupcakeCardio.com about fitness, food and life as a new Army wife. I struggled with my weight from an early age and have recently found myself through running.
I was never athletic in high school except for a short stint on the JV tennis team (I was awful but that’s a story for another day). Once I moved out of my mom’s house and into my first college apartment I discovered that I loved working out and cooking delicious, good-for-me meals that didn’t involve a frying pan—all food as a Cuban-Puerto Rican involves a frying pan.
Running was my gateway drug to fitness, and with diet and exercise I lost 35 pounds my freshman year of college. Eight years later, exercise is now a lifelong habit. I’ve completed six half marathons, a Ragnar and did my first Best Damn Race in Orlando with a friend who said she’d never run more than a 5K. 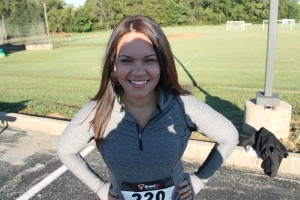