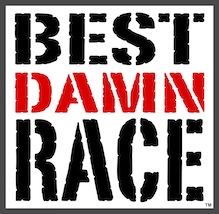 We just announced our biggest season yet; we will be expanding their race series to a brand-new market, Savannah, GA for 2019. This race will be joining the other four markets in Jacksonville, FL, Safety Harbor, FL, Orlando, FL and New Orleans, LA.

“We are very excited to bring our race series to the beautiful and historic city of Savannah,” said Nick Zivolich, race director of Best Damn Race. “We hope the local running community is ready for the best damn race party in the business. Our goal is to not only attract runners from Savannah, but from around the globe. We know some of our Florida runners are traveling to Savannah with us!”

At every Best Damn Race, runners receive free race photos, live results post finish, and unlimited food and drink while enjoying one of the bet post-race parties. BDR is known for their unique and stand-out medals, which every finisher receives. Race distances include half marathon, 10K, 5K and 5K + 10K Challenge. For more details visit: www.bestdamnrace.com.

The Best Damn Race is a running series created for runners by runners and aims to provide a big race experience at a local race price. They pride themselves in spoiling their athletes; every race entry includes: race shirt, finisher medal, bib, goodie bag, free food and free drink.