How Zumba® Made Me a Better Runner

As they say, you have to walk before you can run. Five years ago, I never thought I would run much less “be a runner.” Never thought I’d be a Zumba® Instructor either. And I certainly never thought I could lose 80+ lbs. Walking was the beginning of that journey. Then came Zumba classes then came the confidence to do more.

I walked/ran my first 5k March of 2013 with a time of 43 minutes. An addiction was born! After a few more 5k’s and a lot more Zumba classes, I had an epiphany. You see most songs of any kind are about 3-4 minutes long. In a Zumba class, you dance (salsa, reggeton, cha-cha, etc) at high intensity for 3-4 solid minutes, no stopping. One day it just occurred to me that if I can dance  for 3-4 minutes, I bet I can run for 3-4 minutes.
So one day, a song came on and I started running and did not stop until it was over. The song title I can’t remember, but I do remember the song’s length was 3mins, 38 secs, because I checked. From there it simply became mind over matter and a will to not stop running at least until the song was over. Then gradually two songs, then three, four then finally 3.2 miles without stopping. Once I figured that out, my 5k time went from walking it in 45 minutes to running a 5k in 32 minutes this past May. Since March of 2013, I have about 65 finisher medals and more race bibs than that. Most for 5k’s however I have ran several 8ks, 10ks and a few 15ks and at least 10 half marathons.
For those that think they’re too old or it’s too late to make a lifestyle change, I am proof it that it can be done. I didn’t start my fitness journey until after I hit 40. I joined a gym by my office so I would have to drive by it on my way home every day. After sitting outside the gym several times too anxious to go inside, I finally did it. But I would only walk on the treadmill for 20 minutes and leave, never venturing in to the machines or group fitness room. Then one day, an amazing Zumba Instructor saw me on the treadmill, grabbed my arm and said “you’re coming with me.” She lead me to the gym’s group fitness room and stood me in the corner. She said that treadmill was never going to be my friend and that THIS (meaning Zumba) would be the best friend I ever had. She was right. I followed her lead from that corner for over 2 years before gaining the confidence to move up to the front row. 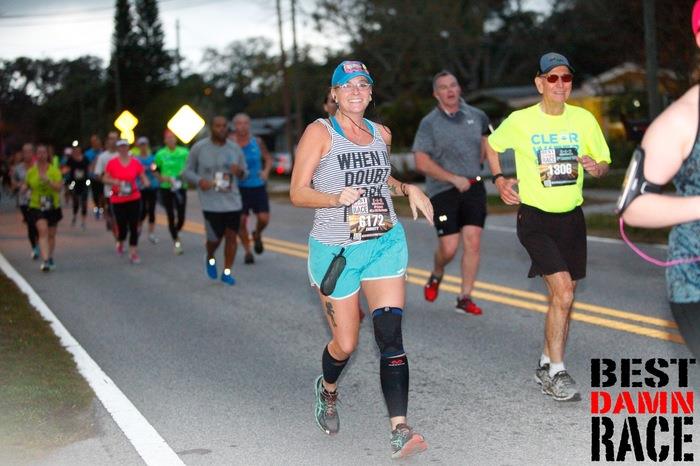 When I wasn’t in a Zumba class, I was walking the parks. Then I was running the parks. Next thing I knew, the instructor was asking me to finish the last routine so she could leave early. What an amazing feeling!! I led, they followed. It was awesome! And again, an addiction was born. I obtained my Zumba license shortly after that and have been licensed since March of 2014 and I get the great pleasure of teaching 4 to 8 classes each week.
Mind over Matter. Age is nothing but a number. Yes you can.
You don’t have to be great to start but you do have to start, to be great.
This post was written by Best Damn Race Ambassador Christy Smith.